The last official event of this year's 2010 eGullet Heartland Gathering in Ann Arbor, Michigan was to be held at Zingerman's Roadhouse. The Zingerman's brand has many food-related establishments under its umbrella and the Roadhouse seems to be the one place to bring all of the other brands under one roof and serve them to the public in a restaurant setting. The last time the Gathering had been in Ann Arbor (which just so happened to be the first Gathering I had ever attended), the weekend had been finished off with a brunch at the Roadhouse. I was eager to return again and sample the food one more time.

Zingerman's Roadhouse was located at 2501 Jackson Avenue, Ann Arbor, MI 48103 and can be reached at 734-663-3663. Parking was available outside the restaurant in the lot surrounding the building.

Here was a shot of the front of the restaurant: 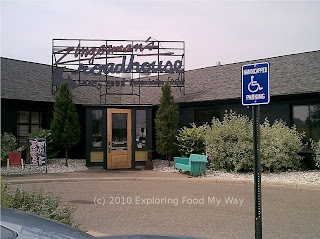 Once inside, I was shown to our table and when I sat down, I noticed the pre-printed menu sitting at each diner's location. The difference this time around versus the last was that today's brunch had a theme: Everything's Better with Bacon. Instead of just selecting dishes off the regular menu, co-founder Ari Weinzweig had put together a five course bacon tasting menu for our little intrepid band of foodies.

Here was a shot of the menu today (one of the courses was a surprise course and not listed on the menu): 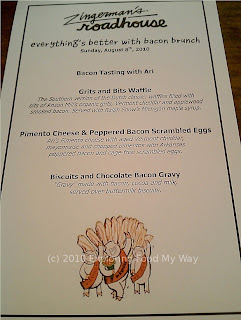 Our server today, Shea, walked around and efficiently filled everyone's drink orders. Knowing that the Zingerman's brand also included a coffee roasting facility, I felt it would be more than acceptable to order a cup of decaffeinated coffee: 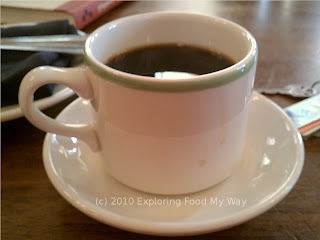 The coffee was bitter, rich, and complex all at the same time. It was the perfect accompaniment to the sweet components of this morning's brunch.

The first dish we would be served today was a simple plate with four strips of bacon on it: 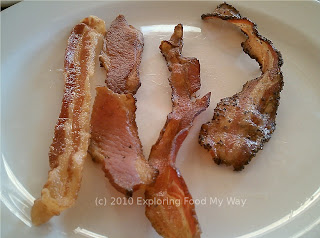 It was at this point that Ari joined us at the table and began to explain the four pieces of meat currently in front of us.

* At the left was a piece of bacon from Sam Edwards. The pork used was of a Berkshire variety that was free range and dry cured in salt before being smoked using green hickory wood.

* Second from the left was a bacon from Allen Benton in eastern Tennessee. It was also a Berkshire variety pig and while the most meaty, it was also the most heavily smoked, spending several days in the smoker with hickory wood smoke after being dry cured.

* Second from the right was a bacon from Nueske's in Wisconsin. It was done using a wet cure made from water, salt, and sugar. Wet cures are traditionally done in cooler, wetter climates and dry cures are typically done in hotter, drier climates.

* At the right was a piece of Arkansas peppered bacon from the Schlosser family. It was also wet cured using brown sugar.

I tasted each as Ari went over a description of the curing and smoking process of each. As Ari pointed out, each was an excellent piece of bacon, but each had its own personality. Where one type might pair well with something delicate like fish (i.e., the first variety), others would definitely only stand up to something much heartier (i.e., the second variety). Just based on the boldness of the smoke flavor, I really liked the second sample, the Allen Benton bacon. Some people might think it was too smoky, but it really reminded me of camping out when I was a young child. The other bacons were good, but that one was superb.

After our bacon tasting, the next two courses appeared at our table on the same plate: 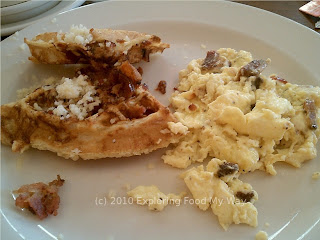 On the left was the "Grits and Bits Waffle" and to the right was the "Pimento Cheese & Peppered Bacon Scrambled Eggs." Let's take a closer look.

First, the Grits and Bits Waffle: 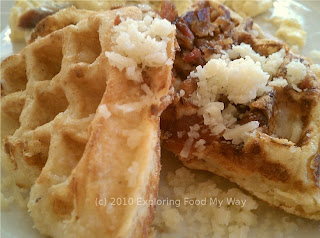 These were waffles that actually had bits of Anson Mill's organic grits in the waffle batter itself and was topped with Vermont white cheddar cheese and applewood smoked bacon. Accompanying the dish were small pitchers of Ralph Snow's Michigan maple syrup. I tried the dish sans syrup and while interesting, it didn't quite feel like a breakfast dish without the addition of a little maple syrup. Not so much syrup that the sweetness destroyed the delicate balance of flavors, but just enough to get that sweet / salty combination just right. I think what surprised me the most was that I could really taste the "corniness" from the grits inside the waffle batter. The bacon and cheese served as a source of saltiness, but amazingly, neither was too overpowering.

On the opposite side of the plate were the pimento cheese and peppered bacon scrambled eggs: 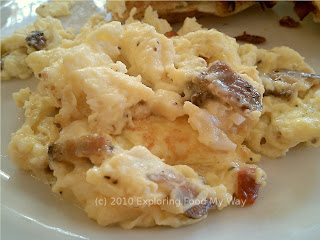 The pimento cheese was a homemade concoction consisting of Grafton two-year-old cheddar cheese, mayonnaise and pimentos and was scrambled into eggs with some of the Arkansas peppered bacon. Personally, I've never had pimento cheese before, but I have to say that I could taste each of the unique flavors that made up Zingerman's version, including the creaminess of the mayonnaise. Again, it was a very well balanced dish and the salt and pepperiness already present in the bacon meant that this needed no additional seasoning at all.

The next dish up on our tasting menu was the "Biscuits and Chocolate Bacon Gravy": 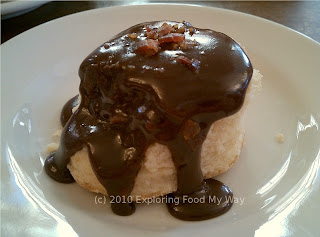 As Ari would tell us as this was being served, the tradition of using cocoa powder is quite old, about one hundred and twenty-five years, from the Appalachian region of the country. Since chocolate was too labor intensive to move into the mountains, it wasn't until cocoa powder became available that this incredibly regional dish became popular for family and special occasion dinners. Essentially a bacon gravy that had been studded with large amounts of cocoa powder, the resulting gravy was ladled over Zingerman's homemade buttermilk biscuits and topped off with just a few crumbled bits of the applewood smoked bacon.

How was this rather unique dish? It was actually pretty good. It wasn't particularly sweet, but at the same time I wouldn't call it entirely savory either. It had the consistency of a fudge sauce, but the smokiness from the bacon cut through to let you know that this wasn't exactly a topper for a scoop of vanilla ice cream. It's probably not something I would crave on a regular basis, but at the same time I found the flavor combination fascinating.

When we thought we had finished, Ari had one final dish for us to try: 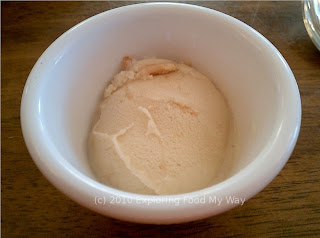 This was a small dish of maple bacon gelato that they had whipped up just for the occasion. A small scoop, it was the perfect way to end our decidedly savory brunch today. The maple flavor was quite strong and balanced nicely with the saltiness and smokiness from the bacon pieces embedded in the gelato. I don't know that I would order this from a gelateria if I was just looking for something cold to cool me down on a hot day, but as a finisher to our bacon brunch, I think this did an admirable job.

While I decided not to include Zingerman's Roadhouse's regular brunch menu in this write-up because we didn't actually eat anything off of it, I will say that their commitment to quality ingredients does pay off with exceptional flavor on the plate. That being said, expect to pay a bit more for dishes here because of that fact. The prices aren't outrageous, but if the ultimate expression of a dish isn't your cup of tea, then the Roadhouse might not be for you. That being said, the place was packed from the moment we got there to the moment we left, so clearly they are doing something right.

From my two visits, I can definitely recommend that you give Zingerman's Roadhouse restaurant a try if you happen to live in or are driving through Ann Arbor, Michigan. The food might be a little on the pricey side, but you will be getting quality local ingredients and premier artisan products that are expertly prepared and quite delicious to eat. As the saying goes, you get what you pay for. [Ed. Note: Although my old English teacher might rephrase that as "For what you pay, you get." She hated dangling prepositions.]