Opening a restaurant is a daunting proposition. Were you to tell me that you wanted to open a high-end restaurant featuring local and sustainable products, I would assume you were talking about the Cleveland market, where clientele tend to be more aware of this kind of dining option. If instead, you told me that the restaurant in question was in Canton, Ohio, I'd have a tougher time believing you. Unfortunately, just having well-executed food isn't enough sometimes to ensure a restaurant's longevity. You also have to have patrons who are willing to pay for the privilege of a chef willing to go the extra steps to ensure that what is put in front of you represents both wholesomeness and seasonality.

This is exactly the angle chef Josh Schory has taken with his restaurant, Lucca. Located on the corner of Cleveland Ave and 4th Street NE, by 7 PM on a Saturday night, it was abuzz with activity, each and every table filled with hungry patrons. But before I get ahead of myself, gentle reader, first some pertinent information. Lucca was located at 228 4th Street NW, Canton, OH 44702 and can be reached at 330-456-2534. Parking was streetside or in a parking lot just north of the restaurant. The restaurant has both a website and a Facebook fan page.

After being seated, the hostess handed me several menus. First, the regular menu: 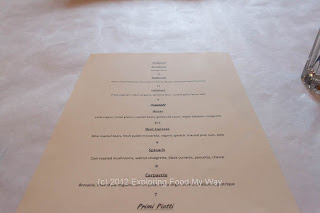 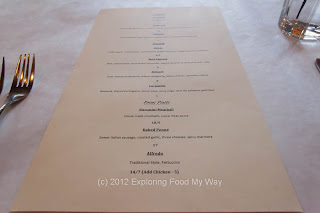 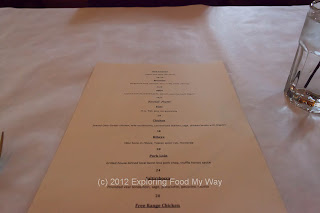 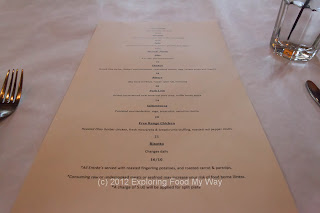 And the daily specials menu: 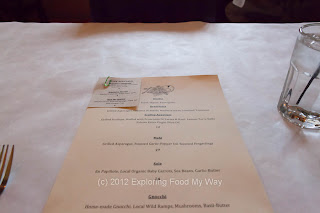 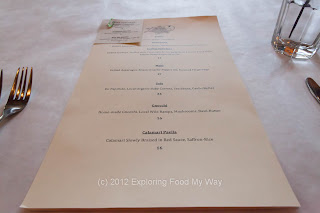 As I began to look over both menus deciding which bits to pick from each, my server arrived at my table with freshly sliced crusty bread and herb-infused olive oil: 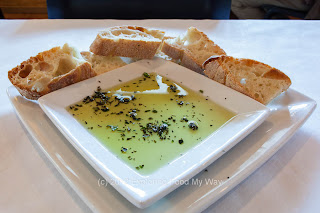 The bread, baked at a local Canton bakery, had a wonderfully chewy crust and soft crumb. The flavor of the bread plain was delicious on its own -- paired with the herbaceous peppery bite of the olive oil, it made a wonderful way to start out the meal.

I decided to begin my meal with the Carpaccio Insalata: 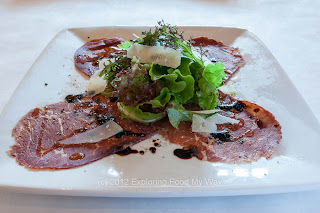 Traditionally, carpaccio is incredibly thin slices of pounded raw beef tenderloin that is dressed with various toppings. Chef Schory riffed on the original dish and served thinly-sliced, cured Bresaola as the base. He dressed it lightly with shaved Parmigiano Reggiano, extra virgin olive oil, fresh lemon, a small green salad and a balsamic gastrique. Salty, sweet, and tart sensations danced over my tongue as I rolled each bite around in my mouth. Although the dish sounds heavy, it was surprisingly light and a perfect segue into my next course.

I was happy to see that many of the pastas came as both full entree-sized portions as well as half-sized portions. After reading over the many choices, I settled on a half portion of the Buccatini with Gorgonzola Dolce: 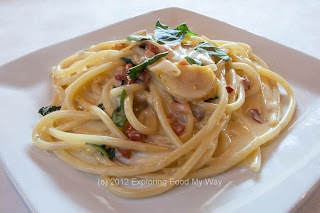 Accompanying the cheese sauce was pancetta, spinach, parsnips, and a hint of truffle oil. When my server sat the plate down in front of me, I inhaled deeply and was rewarded with a heady earthiness of the truffle. Since buccatini is a hollow pasta, the long strands had not only been coated in the sexy cheese sauce, but also soaked it up into the hollow cavity inside of each noodle. The pasta was cooked to a perfect al dente and the cheese sauce had a wonderful balance between the strong blue cheese flavor and sweetness. Neither overpowered the other. Essentially, this was an adult macaroni and cheese dish, but a far more elevated version than I've had before.

I have but two criticisms for this course. First, the pasta was oversauced. In true Italian cooking, the sauce is considered a condiment (thus, it being called condimento) and should essentially coat the pasta lightly and evenly. That being said, most Americans prefer their pasta drowned in sauce, so if this is your preference, you'll be pleased with the dish as it came from the kitchen.

Second, and this is less of a criticism, and more of a suggestion, the cutlery brought out to consume this course included a butter knife, a fork, and a spoon. While there is a great controversy over whether pasta should be rolled onto the tines of a fork using the spoon as a base, when I asked my server why he brought the butter knife, he answered, "In case you wanted to cut the pasta." As a general rule, pasta should neither be broken before cooking nor cut afterwards.

The first two savory courses behind me, I eagerly awaited the arrival of my entree for the evening, the Sole En Papillote which was being offered on today's specials menu: 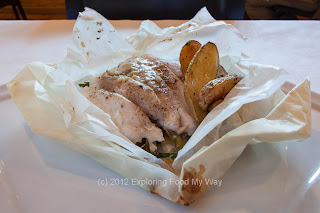 The sole was perfectly steamed and incredibly moist and tender. As I took bite after bite, the flesh simply melted in my mouth. One of the benefits of cooking fish in parchment paper (en papillote) is that you end up with fish that is almost always perfectly cooked. The filet of sole came atop salty sea beans and frenched local organic baby carrots. Additionally, fingerling potatoes that had been roasted separately were perched to the side of the fish. Honestly, everything was delicious, but the seasoning on the fish was a bit uneven. If you combined some of the sea beans with the fish, it worked well, but the fish itself could've used a bit more seasoning.

I wasn't sure if I was going to have dessert or not, so I asked my server to recite the list for me. While there were six or seven options, the only two that were made in house were the creme brulee and the fresh fruit parfait. I have nothing against a good creme brulee, but it seems that every restaurant anymore offers creme brulee (and chocolate lava cake, too). Thus that left me with the Fresh Fruit Parfait: 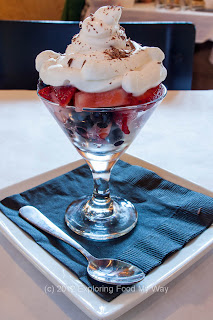 Composed of macerated strawberries and blueberries, the mini-martini glass filled with fruit had been topped with a Grand Marnier-infused freshly whipped cream and garnished with some shaved chocolate. To complement the "mini-ness" of the glass, the accompanying spoon was designed for hands far more delicate than my own. All that said, this was the perfect dessert to finish up the meal. It was only slightly sweet and paired well with the cup of decaffeinated coffee I also ordered.

All said and done, my check with tax came to just under $48 (I only had water to drink). Was this expensive? I suppose that depends on what you normally spend on dinner. I would think that Lucca isn't a place that someone goes to on a regular basis and has a four-course meal. However, most of the full-sized pasta entrees are at $20 or below and you could certainly make a meal out of that, while perhaps splitting an appetizer with a dining partner.

One final note about my experience tonight at Lucca's. Dining out by yourself has its advantages -- primarily, people watching. At several points during the meal, in addition to my server and the hostess making sure I was enjoying the meal, the chef went from table to table asking people if they were enjoying their meal. As it turns out, even though I don't believe I had ever met Josh Schory before, he actually recognized me from the work I've done here at Exploring Food My Way. That being said, others around me were having as equally a pleasurable meal as I was, so I don't believe I received treatment that would've compromised this review.

Do I recommend Lucca? Absolutely. Will I be going back soon? You'd better believe it. I left a business card with my server at the conclusion of the meal and he obviously passed it along to the chef as I got an email not fifteen minutes later thanking me for my visit and telling me about some of the culinary techniques he is trying to work into the cuisine (sous vide and the antigriddle to name two). There are few chefs I have come across where I'd walk in, sit down, and simply ask for the "Chef's Whim." Lucca is a place where I can see myself doing exactly that.

What a fabulous looking grouping of foods. I have Italian restaurant food envy..your meal looks perfect.

I always enjoy your reviews. But honestly, everything looks so fancy and unrecognizable except the bread, I'd never step foot in there. Glad you're having a blast tho!!! ha

Been there, and must admit that the sauce on my pasta almost made me cry it was so delicious. Jill said the food looked to fancy - but if you like something as simple as spaghetti and meatballs, this is the place for you too! Of course, I'm thinking they would be the BEST spaghetti and meatballs you've ever had in any restaurant:)
I'm planning on many more trips to Lucca, and hope you all do also.