The space occupying the old Bennigan's location on "restaurant row" in Copley, Ohio had sat dormant for quite some time. After the national chain went belly up, I often wondered what would go into the space. There were some rumors floating around for a while about what would take its place, but it wasn't until the last two weeks that I got confirmation of the new owners. The first confirmation of the new restaurant's identity was from a longtime reader who emails me from time to time to let me know of her own culinary adventures. The second confirmation came when I read Lisa Abraham's short blurb in the weekly Wednesday food articles in the Akron Beacon Journal. The name of the restaurant was Nicolinni's and apparently it was the first Akron-based and third overall location of the Youngstown-based chain.

Stirred by the promise of another chance to try a Brier Hill-style pizza, I decided to go that very night to check it out for myself. The restaurant was located at 85 West Montrose Avenue, Copley, Ohio 44321. They can be reached at 330-664-0808. Parking was in the lot directly outside the building. I was actually surprised that the parking lot wasn't completely full as the restaurant had been open for only a couple of weeks.

Here was a shot of the roadside sign just off of the street: 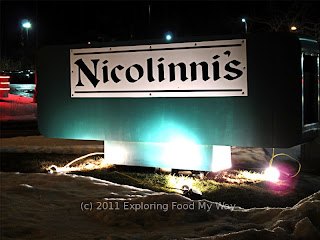 Once inside, I discovered that due to a server shortage, the wait for a table was approximately twenty minutes. While I wasn't in a particular hurry, my other option, sitting at the bar right away, appealed to me and I decided to do that. After taking my drink order, the bartender left me with the two-sided menu to look over (top and bottom shot of each): 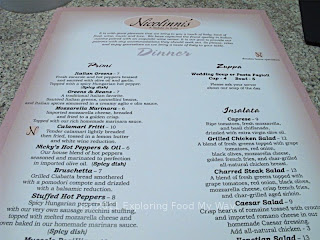 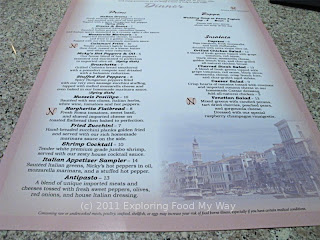 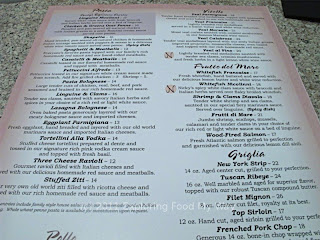 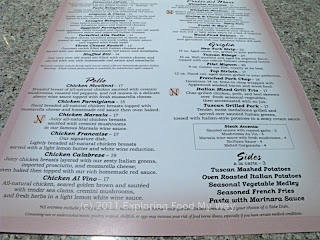 I looked two or three times for the Brier Hill pizza, but the only thing I could find even remotely close to a pizza was the Margherita Flatbread. When I asked the bartender about it, she confirmed that the pizza was only available during lunch and happy hour. Bummed out, I returned to the menu to make an alternate selection. Having never been to any of the Nicolinni's locations, I decided to look for some of their signature items. Interestingly, while some of the signature items were marked with a "N" logo, others had no such mark, but contained the phrase "signature item" in their description.

After placing my order, I handed the bartender my menu and returned to fiddling with my camera to make sure it was set up properly for when the food began to arrive. Unfortunately, I went from having no food in front of me to nearly everything all at once. In a move to get something in front of me sooner rather than later, the bartender had brought out my salad and bread prior to my appetizer thinking the kitchen was running behind. Sadly, within moments of the first round of food being delivered, another food runner showed up with my flatbread, too. I don't actually blame the bartender for bringing the salad early, as her intention was good. Her timing was just wrong.

Here was a shot of the house made focaccia: 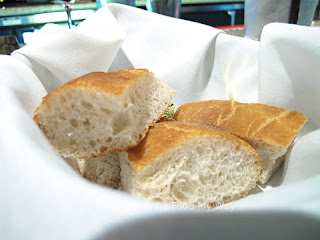 This was actually quite good and had a nice layer of crunchy salt on top of the bread. I could tell from the minute I smelled it that it was fresh. It had a great chewy texture and the crust was nicely caramelized. The bread was an excellent way to start the meal.

Along with the bread came a cup of pesto dip: 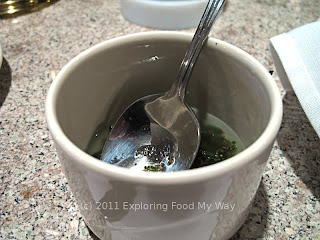 This was a warmed oil that had been infused with a solid pesto flavor. While it worked well as a dip for the bread, the bread was so good on its own, that I didn't really use much of the dip. If you like pesto, you'll enjoy this oil. Extra points for it being served warm.

Since my entree came with a house salad, I had only to indicate that I would like it dressed with the house dressing, which I had presumed was Italian: 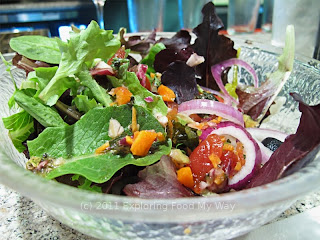 The salad was actually quite large and big enough for two entire servings (the bowl above came with tongs and a separate plate for actual plating of my portion). All of the ingredients were fresh and crisp, although the salad had sadly been overdressed as there was a puddle of dressing sitting at the bottom of the bowl. That being said, the dressing had a nice acidity to it and the salt level was just right. If you worry about over-dressed salad greens, ask for the dressing on the side and do it yourself.

Next up was the Margherita Flatbread: 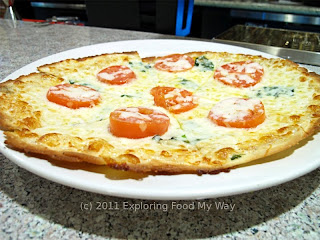 The flatbread had been cut into six slices and would've made the perfect size appetizer for two to three people. I ended up only eating half and taking the rest with me. Traditionally, a Pizza Margherita is a thin crust pizza topped with extra virgin olive oil, tomatoes, basil, and sliced mozzarella. Nicolinni's version was somewhat true to this vision, although the cheese was heavy handed. Also, as you can see in the photo above, gentle reader, the tomatoes were sliced way too thick and felt totally out of place on this thin crust creation. The crispness of the flatbread was nice, however.

For my entree, I decided on going with Chicken Francaise: 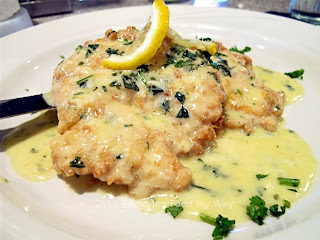 The chicken breasts had been battered and fried until golden brown and then topped with what I assume was beurre blanc (being French-style chicken, after all). The chicken was perfectly cooked, being both juicy and very tender. The coating on the chicken was flavorful and not greasy and the sauce had a nice balance between the unctuousness of the butter and the zip from the lemon. I thoroughly enjoyed the chicken.

Unfortunately, the same thing cannot be said about my included side dish, the Whole Wheat Penne topped with Nicolinni's Homemade Marinara: 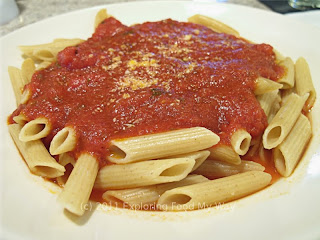 If you look closely at the photo above, you can see the problem in the bottom of the bowl: leftover cooking water. Whatever method was used to make this pasta, it needed an extra thirty seconds to drain properly before plating. In a bit of foreshadowing, when I tried the pasta without sauce, it was definitely overcooked and about a shade under mushy. It is fantastic that Nicolinni's is offering a whole wheat pasta option, but if they aren't going to cook it properly, then they lose points overall. The marinara sauce was thick and rich and had a nice balance of acidity and sweetness. To simplify: marinara good, pasta bad.

Since I ate about half of everything tonight, I had quite the doggie bag to go. Judging that I was pretty full already, I declined dessert and simply asked for the check. With tax and tip, it came to slightly over $32, which although sounds expensive at first, I took as much food home with me as I ate during dinner. $16 per portion was a reasonable amount to spend at a restaurant that seems to be positioning itself as upscale mainstream Italian. While I do plan on returning to Nicolinni's for another meal (probably during the day so that I can try the Brier Hill style pizza), as with most restaurant experiences, my visit today had some good and some bad. If they can work the kinks out, I suspect that they will achieve a nice fit somewhere between Olive Garden and Vaccaro's Trattoria.

I'm glad that our experience was better than mine. That chicken Francaise looks delicious.

I am totally typing impaired. Brain and fingers do not come together on the keyboard. But I can walk and chew gum!