When I discovered that fellow food blogger Alicia from Poise In Parma was doing her own version of the Lenten Project up near her home, I was delighted and honestly, just a little bit flattered. While I am well aware of the fact that there are a ton of great fish fries out there, I am but one person, only able to cover a fraction of the churches, clubs, and organizations in the Akron area, much less others. Through a short Twitter conversation, Alicia thought it would be a fun idea to join forces and cover a church fish fry somewhere between Parma and Akron. I couldn't have agreed more.

I looked around the Internet for a church doing both fried fish and pierogi in the Richmond area (a city roughly halfway between us), but alas, I could find nothing. Knowing that my fried-from-frozen pierogi experience so far (with the exception of my visit to St. Nicholas earlier in the evening) had pretty much been devoid of any kind of homemade pierogi, I expanded my search and ended up finding two churches pretty much in Alicia's back yard that she hadn't covered yet. I presented both options and we both agreed that for my second meal during the fourth week in Lent, I would be attending the fish fry at St. Andrew Ukranian Catholic Church in Parma, Ohio.

St. Andrew was located at 7700 Hoertz Rd, Parma, OH 44134 and can be contacted at 440-886-3258. Parking was somewhat tricky as there was a cemetery between the church and the fellowship hall where the fish fry was hosted. My best advice to you, gentle reader, is to go up the main driveway and then once you are behind the church, take the exit to the back left of the parking lot, not the one that leads straight into the cemetery. I made this mistake and ended up having to backtrack to finally find the correct parking lot.

Here was a shot of the front of the building hosting tonight's fish fry: 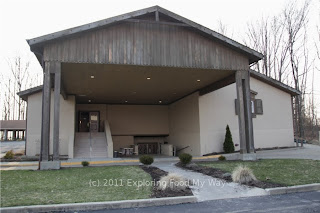 Once inside, I met up with Alicia and her husband Hans as well as fellow food blogger Jill, from ClevelandRocksClevelandEats. We were warmly greeted and told of the award-winning pierogi (as judged by Cleveland Magazine three years ago) that we could expect to be served tonight. I knew that I was looking forward to it. While the general procedure at St. Andrew was to place and pay for your order before sitting down at the table, Alicia happened to retain one of the printed and laminated menus. Here was a shot of the menu: 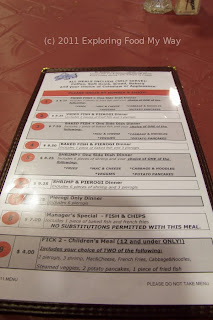 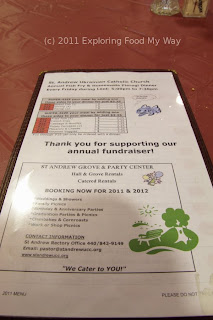 I opted to go with the fried fish and pierogi dinner (clearly) and being in a good mood, decided to add a side of the macaroni and cheese as well. My total came to $11.50, which while a bit pricier than some of the other dinners I've had, wasn't crazy either. Once I ordered and paid for my dinner, I took my meal ticket and proceeded to make the rounds at the various stations inside the main room to pick up my food. Here was what I ended up with at the table: 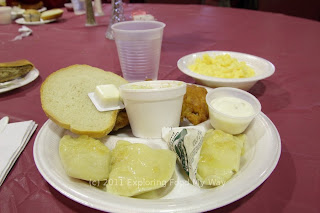 Of course, the first place I started was with the Fried Fish: 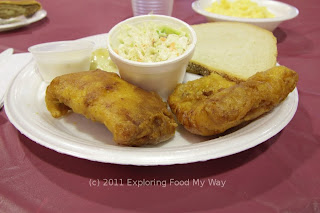 By the time we arrived at paid for our meals, it was already close to 6:45 PM. Since the dinner ran only until 7:30 PM, almost all of the fish required for the remainder of the evening had already been fried and was simply being held in the kitchen and served as needed.

Here was a shot of the interior of the fish: 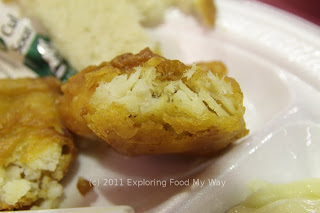 The outer coating was very crispy (initially a good sound and sign), but once we started to tuck into the fish itself, we discovered that it was decent to poor in terms of moisture. The flavor was fine, but both of my pieces were a bit dry. Alicia's husband, Hans, had one fillet that was moist and one that was not, but the rest of the diners tonight found the fish to be lacking in the moisture department.

After being a bit disappointed in the fried fish, I next turned my attention to the "award-winning" Pierogi: 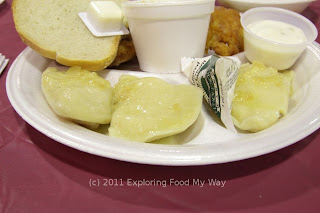 Ding! Ding! Ding! We have a a winner! These were not only tender, but also incredibly flavorful. The filling was nicely seasoned and the fried onions and included packet of sour cream meant that I could truly savor my three potato-laden pockets of love tonight. THIS was what I had been craving during the past four weeks of Lent. Regardless of the other components on my plate tonight, the pierogi were enough for me to recommend St. Andrew.

I next moved onto the Macaroni and Cheese: 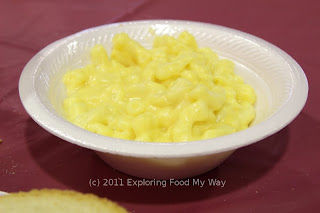 This had wonderful cheese flavor, but unfortunately, it was overcooked. I'd be curious to try this just after the dinner service started at 5 PM, but by 7:00 PM, the pasta had only a slight bit of texture. It was definitely homemade and clearly pasta doesn't do well being held for a long time, but in the grand scheme of things, the overcooked pasta made this a less-than-stellar version of this American staple.

As opposed to the woman at St. Nicholas who claimed that homemade coleslaw just wasn't possible for the masses during Lent, St. Andrew brought serious game to their version: 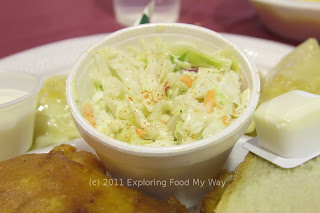 Clearly homemade, the slaw was tasty and refreshing. Just like the pierogi, I had grown accustomed to food-service coleslaw. Having the fresh stuff available was both surprising and welcomed. While it wasn't perfectly balanced between sweet and sour, it did go a long way towards satisfying my need for something made from scratch.

Finally, every meal included one of several sweet treats. Tonight I decided to go with a slice of Honey Cake: 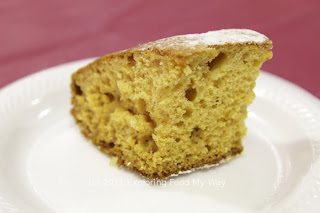 While the cake definitely tasted of honey, it was just a touch dry (most likely due to the fact that it had been sitting out in the open air before I approached the dessert table and requested a piece). At the same time, I also ate the entire piece of cake fairly quickly, so clearly my objection to its dryness wasn't too overpowering. There were a selection of desserts available (poppyseed rolls, amongst them). Like my meal earlier in the evening, I liked being able to finish my meal with something small and sweet, but not overpowering.

I finished my meal tonight very happy with the pierogi, but somewhat disappointed in the fish and macaroni and cheese. That being said, I'm guessing that if you show up sooner rather than later, both of those issues might be corrected, at least somewhat.

Here are the current rankings so far from best overall to worst overall as well as an individual grade for each of the major elements on the plate.

The nut roll was just like my grandmother used to make. That was a nice treat. I might have to go back there again this week, but closer to 5:00 this time...