A Little Bit Of Philly At Original Steaks And Hoagies?

I've said it before and I'll say it again: If you want sandwich authenticity, more often than not you are going to have to track it down to its source. Want a great Chicago Italian Beef sandwich? Go to Chicago. Want an authentic Philadelphia cheesesteak sandwich? Travel to the City of Brotherly Love. Of course, with any hard and fast rule, there are certainly exceptions, such as when I discovered a transplanted New Jerseyite who owned and operated a cheesesteak shop in of all places, Wilkes-Barre, Pennsylvania called Cosmo's Cheesesteaks, but he knew his product well and knew exactly how to replicate it away from its original location.

Many Ohioans think that if you slap some cooked sliced beef, melted cheese, peppers, onions, and mushrooms on a sub bun, that makes a good Philly cheesesteak sandwich. *Bzzt!* Wrong. Just like with all great sandwiches, every single ingredient is key, especially the roll on which the sandwich is served. And that, largely, has been the downfall of most northeast Ohio attempts to get this sandwich right. The roll must be sturdy enough to stand up to the juice from the cooked meat so that it doesn't "sog out" too easily and fall apart. Sorry, but your typical food service Orlando "hoagie" roll just isn't going to cut it.

When I read that a father and son pair had opened up an authentic Philadelphia cheesesteak and hoagie restaurant in Twinsburg called The Original Steaks & Hoagies, of course I was skeptical. Many have come and tried but none have succeeded. The fact that the duo came from Philadelphia where their family had successfully managed three national chain Laspada's Original Steaks & Hoagies sandwich shops did make them sound promising, but in order not to be too disappointed, I decided before I went that I didn't want to get my hopes up.

Since Twinsburg was more or less half-way between Cleveland and Akron, I decided to check them out for dinner on my way home from work. As I mentioned in my article on Cosmo's Cheesesteaks, I intended to walk into the restaurant and ask for the most basic of cheesesteaks, a Whiz wit. This would be a cheesesteak with Cheese Whiz and grilled onions. The only other non-Philadelphia restaurant where this phrase has successfully gotten me a sandwich and not strange looks was Cosmo's. If Original Steaks & Hoagies wanted to be labeled authentic, then the staff taking orders needed to be able to speak both Philadelphian and non-Philadelphian ordering lingo.

The Original Steaks & Hoagies sandwich shop was located at 10735 Ravenna Road, Twinsburg, OH 44087 and can be reached at 330-998-6586. For purposes of locating the shop, it was in the Twinsburg Plaza (in case that makes more sense than the address). There was plenty of parking in the lot surrounding the stores.

Having just opened, they haven't had time yet to invest in a proper storefront sign. Here was a shot of the front of the store: 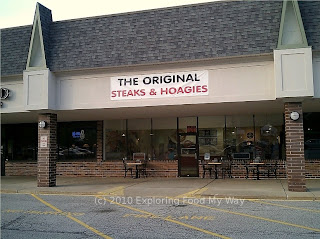 After walking in, I noticed two things immediately. First, it was fairly empty for dinner time. That being said, it was nice to see that it wasn't cluttered with lots of Philadelphia tchotckes, trying to bring in a fake sense of authenticity. The second thing I noticed was the short, but sweet, menu hanging on the wall directly in front of me: 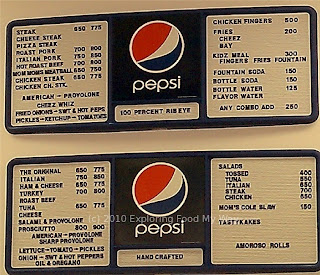 A young woman at the left end of the ordering counter welcomed me and asked if she could take my order. The conversation went something a little like this:

"What's the difference between the small and large sandwich?"
"The small is 7 inches and the large is 10 inches."
"Alright, then, I'll have a large Whiz wit, please."

More silence. She looked to an older gentleman who was working behind the counter to her left.

Bill looked up from what he was doing, smiled and walked over to us.

"This gentleman has clearly been to Philadelphia before. He wants a large cheesesteak with Cheese Whiz and grilled onions."
"Oh. Why didn't he just say that?"
"He did."

I liked Bill. It turned out that I had just met Bill Fromholzer, Sr. Bill, Jr., as it turned out, was running the grill behind the main wall. To accompany my sandwich I decided to give the Bay Fries a try as well. While I wasn't one hundred percent sure what Bay Fries were, I suspected that they might be French fries seasoned with Old Bay seasoning. My hunch was right.

After placing my order and paying for it at the opposite end of the counter, I grabbed my bottle of water and settled in to an open table that had a good view of the entire restaurant. I started snapping photographs of interesting signs and framed pictures on the walls.

The first one detailed the origin of the cheesesteak: 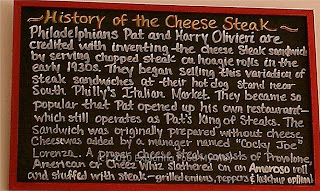 The second, the origin of the hoagie: 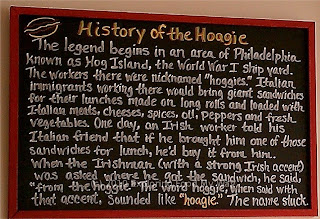 Not to be outdone, the back of the napkin holder gave a little history of The Original Steaks & Hoagies sandwich shop: 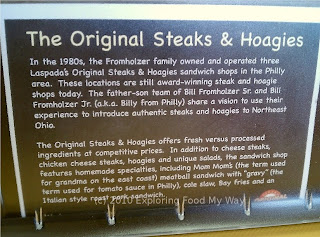 While I continued to look around the shop, I could hear the line cook in the back chopping the steaks with his hard, metal spatula. Within just a few minutes, my cheesesteak arrived in a bright red plastic basket: 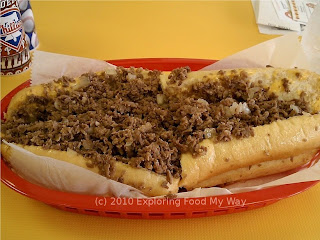 What first popped into my head was, "Wow, that's big! How am I going to eat this whole thing? Plus fries?" But, as I took my first bite, I was rewarded with very juicy rib eye cooked perfectly, a layer of creamy, cheesy sauce, and every now and again, the sweetness from a nicely cooked onion. The roll, imported from the Amoroso Bakery in Philadelphia, while not exactly the same one I remember being used at some of the more famous cheesesteak joints like Pat's and Geno's, definitely did an excellent job of holding the sandwich together without getting sogged out. In fact, from first bite to last, it managed to hold together beautifully.

Shortly after my sandwich arrived, my fries followed: 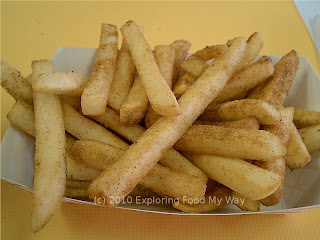 Dusted lightly with salt and Old Bay seasoning, these were excellent. The fries on their own were crispy on the outside, not greasy, and soft and fluffy on the inside. This was exactly the style of French fry that I love. With the addition of the Old Bay seasoning, this really was an excellent accompaniment to my sandwich. I ate the first few sans ketchup, but being a ketchup fiend, at some point I did add a couple of squirts of the sanguine condiment. While it definitely added a bit of acidity and sweetness to the fries, I don't think it really helped propel the flavor very much. I would be just as happy eating them as they came from the kitchen.

My order of Bay Fries today was only $2 and with the sandwich that I received, I could've easily shared them with another diner. In fact, even with the smaller 7 inch sandwich, I probably could've shared them with another diner, too. The fries are also available naked as well as with Cheese Whiz, and all three combinations will run you the same $2. I should also note that the restaurant was using trans-fat free oil in their deep fat fryer. While certainly not as healthy as eating rice cakes and brown rice, at least they are doing something healthier for their customers than many other restaurants.

As I was finishing my sandwich and fries, Bill, Sr. again approached me at my table to see how I was making out. Here was part of our conversation:

"So how was it?" Bill, Sr. asked.
"Actually, quite good. And I am really digging the roll on which you are serving your sandwiches. It stood up from start to end and didn't fall apart," I replied.
"Yeah, the roll is as important as the meat and fillings. Just the other day I had a guy in here from Orlando and after describing the qualities that the roll has to have, he quickly agreed that the way they pack their rolls after baking them makes them too soft for what we need."
"Really?"
"I offered to help them perfect their packaging process so that the rolls don't continue to steam inside the packages (which makes them too soft) and I guess we'll have to see what happens from that."
"Well, I can tell you that I intend to return for the roast pork and Italian pork sandwiches. As good as a cheesesteak is, nothing beats a great pork sandwich."
"My son (Bill, Jr.) makes the pork. Unfortunately, it isn't available all the time. If you leave me a business card with a phone number, I'll give you a call and let you know when to stop by."

I thought about the fact that the only business card I had was for this blog and obviously giving him that would reveal who I was and why I was there. Then again, my first visit had definitely been anonymous up to this point and I had already paid for and eaten my food, so I decided to whip out a card, grabbed a pen, and wrote my phone number beneath my email address.

"Here you go," I said as I handed Bill the card and got up to collect my personal affects.

Not ten seconds later, Bill literally swiveled on his heels and said, "Wait. Are you a food writer?"
"Yes. Yes, I am. And I am definitely looking forward to coming back to try the Italian Pork."

And I am. I suggest if you want a true taste of Philly, gentle reader, make the trek to The Original Steaks & Hoagies sandwich shop and try out one of their sandwiches. Even with the simple menu, there really does seem to be something on it for everyone, assuming that they love sandwiches as much as I do. And whether you decide to order a 'Whiz wit' or a 'cheesesteak with Cheese Whiz and grilled onions,' they'll do their best to accommodate your every need.

Sounds awesome! I wish they would have been there when I worked down in Twinsburg. Although, for my waistline's sake, maybe it's good they weren't. :)

@Liz: You make an excellent point. I suppose I would probably visit FAR too often if I lived closer to the restaurant.

Being a Philly native, I had to read this, but had reservations... I know NOBODY can replicate a Philly steak here, 'cause you can't get the roll right. It HAS to be an Amoroso roll, all Philly folks know this.
Half way into to read, I spot it! They use AMOROSO rolls!!! Now I gotta go... wow.

@Joe Harvey: As a transplanted Philadelphian, I will be very interested on your take as well. It's the closest thing that I've found in NE Ohio.

I can't wait to try this! We've been wanting to for so long. Thanks for posting pictures! Saw your review on Urbanspoon and checked out your blog. I also blog as well. Hope you will join mine. Thanks so much for sharing your experience!

Here is the link:
www.ArtByASM.BlogSpot.com