Any time I've ever come across a discussion, be it on the Internet or between actual people, about who makes the best hamburger, Whitey's is always thrown into the conversation. Over the years, I've gathered scant bits of information about them. They have really great chili. They are located in Richfield, Ohio. They make killer burgers. But that was the extent of my experience until I decided to make a post-shopping trip stop for a bite to eat one afternoon. Given the fact that it was nearly 3 PM on a Sunday when I stopped, I figured there wouldn't be an issue getting a table. I was right.

Whitey's Booze 'n Burgers was located at 3600 Brecksville Road (just a little bit north of the Brecksville/Wheatley intersection), Richfield, OH 44286 and can be reached at 330-659-3600. They also have a website located here. There was a more than ample parking lot and I easily found a spot and got out of my car.

Here was a shot of the front door: 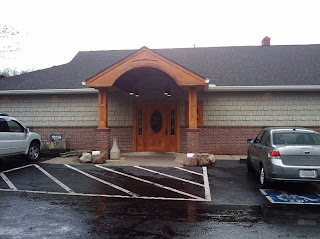 There was a volleyball court in the back of the building and I discovered after walking in through the door above that there was an another door in the back between the court and the bar. As it was rainy and a bit nippy today, there wasn't any outside frolicking happening. From the moment I walked into the bar, I had to adjust my vision because of the darkness. I was greeted with a traditional bar at first and when I walked around the corner, additional restaurant-style seating was available.

Just inside the front door was a chalkboard wall menu laying out daily and monthly specials: 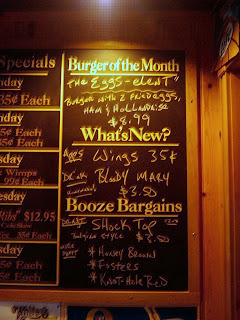 "What?" I thought to myself. "Fried eggs on a hamburger? I'm intrigued." Not sure whether this monthly special was an homage to Michael Symon's Lola burger or the Good Morning burger from The Simpson's television series, I thought about it all the way to my table. The other takeaway from this menu was that today was $0.35 chicken wing day and I'm always in the mood for some good (and even not so good) chicken wings.

After seating me, the hostess handed me the menu. On the front was the restaurant's logo: 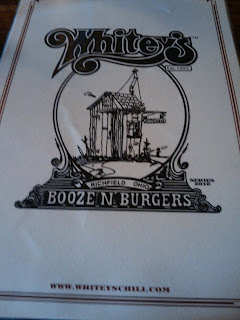 The back contained an array of appetizers, salads, a few baked entrées, burgers, and sandwiches: 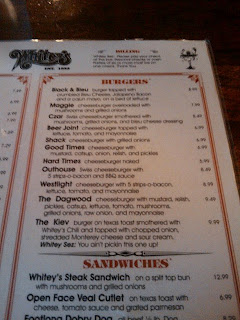 I only took a picture of the burger section because the lighting was pretty horrific, even having been sat at a table close to a window. I looked over the list of burgers and even though my server informed me that I could essentially build my own burger if I wanted to, the Eggs - elent burger from that chalkboard menu just kept nagging away at my brain. When I asked if the fried eggs were cooked all the way through or if the yolks were still runny, my server acknowledged the latter. Done! I was sold. I also found out that the burgers (and I'm guessing the sandwiches, too) were all a la carte. That was actually good news for me since I wanted to get a small order of their chicken wings as a side instead of potato chips or French fries.

After placing my order, I set about watching the large flatscreen television sets mounted on the walls and before I knew it, my chicken wings had arrived: 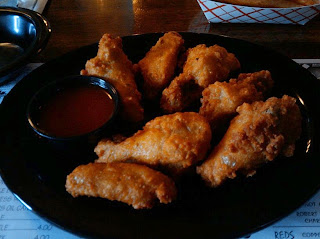 My server informed me when I was originally asking about the wings that all the wings are hand-breaded and served naked with the sauce of your choice served in a little cup on the side. Normally I prefer to have my chicken wings pre-sauced, but okay, I could roll with the punches. The chicken wings were excellent, probably some of the best I've had in the northeast Ohio area. The breading on the outside was crispy without being greasy, the tender wing meat was succulent and juicy and the wings just by themselves were nicely seasoned. The accompanying sauce, "Hot" as the menu described it, was the classic combination of hot sauce and butter. This was exactly the kind of sauce I remember cutting my wing "baby teeth" on back in college and I enjoyed every bit of it. If I go back to Whitey's for nothing else, their chicken wings would be enough.

Since I had told my server that this was my first visit to Whitey's, she brought out a small complimentary container of their fresh cut fries: 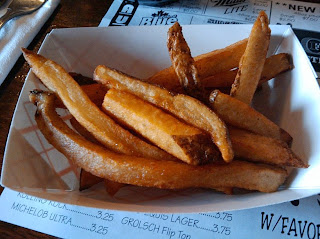 Even though I tend to shy away from fresh cut fries, these were actually pretty darn tasty. They had the rustic look and taste of a fresh cut fry without the annoying qualities that I dislike so much. They were crispy on the outside, creamy on the inside, and not the least bit greasy. I don't know that I would've ever ordered these on my own, so I have to give my server thanks for thinking I might like to try them. I will also say that these are best eaten hot and fresh. By the time I finished my meal and packed up the remainder, the fries were still good, but a tad more limp once they cooled off.

Having finished all of my chicken wings and some of my fries, the main event arrived, the burger: 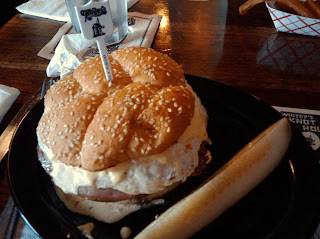 The Eggs - elent burger consisted of a half-pound burger cooked to order, topped with ham, two fried eggs, and hollandaise sauce and crammed into a seeded bun. I had ordered mine medium and when I used the supplied steak knife to bisect my burgers, I was rewarded with this: 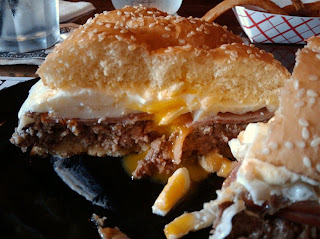 Here was another side shot, this one just a bit less cluttered: 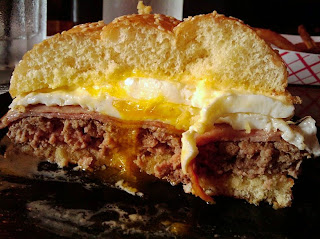 I have to admit that Whitey's has a damn fine burger and I'm so glad that I stuck with the monthly special and didn't order a burger off the regular menu. Essentially Eggs Benedict on top of a burger, the flavors really competed well with each other. There were two small problems, however. First, as much as I was thoroughly enjoying how juicy this burger was, the juiciness also worked against it, too. The heel of the bun had been almost completely sogged out and it soon became apparent that any kind of structural integrity from the bottom half of the bun was gone. The crown was fine, but the heel ... eh, not so much.

The other issue for me was the seasoning, or lack thereof. When I tasted a bit of the burger meat just by itself, I found it grossly underseasoned. Granted, both the ham and the hollandaise were seasoned, but seasoned appropriately for itself. When you added in unsalted fried eggs and a burger patty, there was seasoning, yes, but it lacked a real punch. If Whitey's ever chooses to address those two issues, LOOK OUT! To my taste they will have achieved serious contender status for the best burger in northeast Ohio.

I took the other half of my burger along with my pickle and the remainder of my fresh cut fries home with me and planned to have a little snackfest a little later on that night. I should also mention that Whitey's was a cash/check only kind of establishment and no credit cards were accepted. Fortunately, there was an ATM available in the main hallway in case you didn't bring enough green with you to pay for your meal. Also, your server will present you with your check, but you actually go into the main bar area to pay your tab.

Having now eaten at some of the major heavy hitters in the burger arena in the Cleveland and Akron area, I have to admit that Whitey's is certainly not out of place when talking about great burgers. I'm going to have to make it point to return sometime soon (hopefully another Sunday so I can get more of their excellent chicken wings on the cheap) to try their other famous offering, the chili. I heartily recommend you look Whitey's up if you happen to be in the Richfield area (they are only fifteen minutes from the Fairlawn area, specifically Summit Mall). I think even with my minor quibbles about the seasoning and the soggy bun bottom, the burgers are quite good.

Great to read a review of Whitey's. My boyfriend grew up in Richfield and he is always going on and on about their burgers. We tried to stop once, but they were closed. Looks like we'll be back!

@Bite Buff: An excellent point about their hours. The kitchen is open at 4PM Monday through Saturday. On Sunday, however, they open at 1 PM, which makes lunch a much more viable option.

I've only been there once and I found it to be a bit overrated. Like you I'd always heard how great the burgers were. I think I may have to give them another try!

Always enjoy your reviews. Having just recently been to Whitey's, this one was very timely for me. I've always enjoyed the food there, and while I do like the burgers (a lot), there was always something I could not quite put my finger on. The seasoning! Or lack of, as you point out. You nailed it! Just a bit of seasoning would put them over the top. I agree.

Keep up the good work!

@John K: It isn't that I don't like fresh cut fries. The problem is that most of the time when fresh cut fries are involved, I end up with limp, oily fries that have no crunch to them. I think the problem for me is that so few people can make really good fresh cut fries, which is why I tend to avoid them when I see them.

If you want to see (and taste) what my idealized fry is, order them at either Continental Cuisine (in Fairlawn across from Summit Mall) or Prime at Anthe's (near Portage Lakes in Akron).

Re: Fresh cut fries. Now I understand! Yes, nothing worse than limp, oily fries. I work very close to Continental Cuisine -- love their Shawarma! Don't think I've had the fries though. I'll have to stop by again soon and try them.