Recently I came across fellow Akronite food blogger Kathy and her site called Carano's Cucina. In one of her more recent blogs, she details the discovery she made one day when she and her husband decided to stop at a local Cuyahoga Falls bakery just down the road from Kreiger's Market on Graham Road called Kiflis Bakery and Restaurant. What drew her in was a sign outside the building advertising fresh "burek". Keenly interested in what burek was, they stopped in to find out. As you can no doubt see from her blog entry, they had discovered someplace unique offering something unique.

Having driven by this intersection hundreds of times in my life, I was stunned to learn that this building housed a wonderful ethnic bakery that was offering up homemade and heartfelt goodies for the local community. They are located at 526 Graham Road, Cuyahoga Falls, OH 44221 and can be reached at 330-926-1999. There is currently no website, but as owner Mire Udovicic mentioned to me, he is currently having one designed for him. To make locating the building that much easier, the bakery is essentially on the corner of Graham Road, Bath Rd, and 8th Street.

Here is a view from the outside (notice the drive-thru service window on the left side of the building): 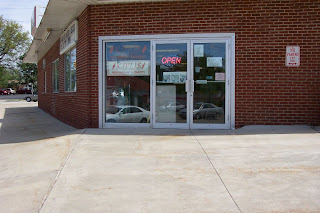 I was a concerned about the availability of fresh burek when I first pulled up because there wasn't a sign outside advertising the fact. Once inside the door though, a sign immediately to my right put me at ease: 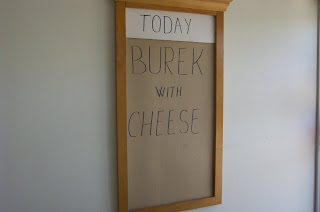 And it turns out that I showed up on a good day. Not only was there cheese burek, but also beef, spinach and cheese, and apple. Burek can be either sweet or savory. Since Kiflis is both a bakery and a restaurant, I decided to take a look around at some of their offerings.

First up, the handwritten menu on the wall: 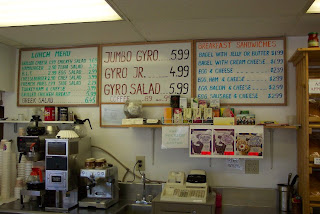 There are between 5 and 6 tables available to sit at and eat your meal. Given Kiflis's hours of operation, that would most likely be breakfast and lunch. They close at 5 pm during weekdays and on 3 pm on Saturdays. As you can see from the menu above, the most Mediterranean item on the menu would be the gyros. Everything else is mostly American style sandwiches.

Next up is a shot of one of the pastry cases that houses some of the burek available. All the burek is rolled in the same manner, so you can't really tell which type you have just by looking at the outside. Here we have spinach and cheese on the left and plain cheese on the right: 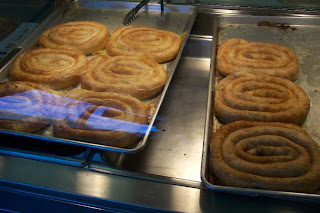 In the next case over are some of their pastries that they offer by the slice: 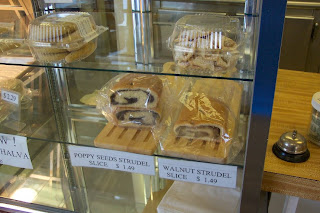 Here you can see some of their cookies on the top shelf and the poppy seed and walnut strudels on the middle shelf.

Next up is a shot of several varieties of cookies that they offer. They generally fall into two categories, those with no jam (such as almond cookies) and those that do. I didn't get to try any of the cookies this time around, so a return trip is definitely in order! 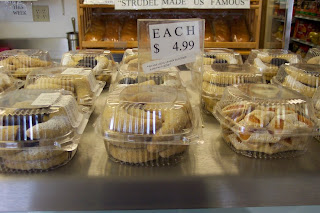 And in the rack behind the cookies was shelf after shelf of strudel: 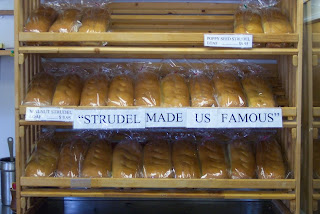 As with most small ethnic bakery / restaurants, Kiflis also offers some harder to locate ingredients in case you want to try and make these treats at home. While Kiflis doesn't have as large a grocery section as some other Akron ethnic stores I have visited, they did offer quite a variety of not-so-easy to find items. The prices also seemed quite reasonable. 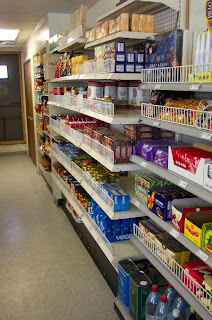 On one of the walls by the grocery area, an article from 2001 from the local Cuyahoga Falls newspaper heralded the arrival of Mire and his wife and their new bakery: 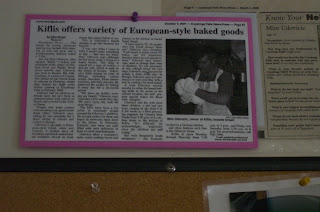 I didn't actually taste anything at the store, but I did spend about twenty minutes talking with Mire and how he runs his store and decided to leave with tastes of four of his treats: a cheese burek, an apple burek, a slice of poppy seed strudel, and a slice of the walnut strudel. He assured me that they would be absolutely fine until later tonight.

First up, a shot of the two strudels, walnut on the left/bottom, poppy seed on the top/right: 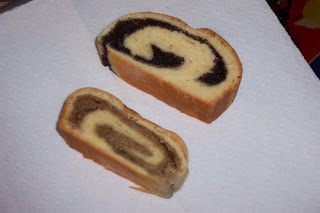 While just a touch dry, the overall taste on both was exactly what I expected. They were sweet, but not too sweet. The dryness of the dough didn't particular bother me because I knew that a) I had asked for slices of strudel from an already cut whole strudel and b) I bought them at 1:30 pm and didn't try them until 9:30 pm later that day. The walnut filling had a wonderful nutty taste and combined well with the heady cinnamon spice. It was ground completely smooth so there wasn't any texture to it. The poppy seed was equally as good with that wonderful lemony citrus undertone to it. Both of these were excellent examples of a well done European strudel. You could definitely enjoy this in place of a nice coffeecake in the morning.

Mire pointed out that burek is traditionally a Turkish dish that he has given his own spin to. Literally. Traditionally burek was a layered type of pastry. Finding this method to be too time consuming to be profitable, he decided to do the version he offers today. Essentially they take handmade phyllo dough that they make on-site, layer a few sheets, place the filling along one end and roll it up sushi-style. Then they take the long filled pastry rope and wrap it around itself in a circular fashion. Brush with lots of butter, bake, and you get this: 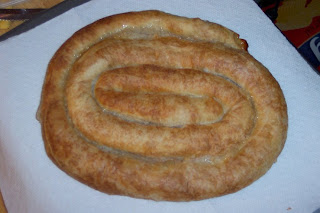 Although you can't tell from the outside, this happened to be the apple burek. This is big enough for one hungry adult or could easily be split between two less hungry people. This is such a wonderful treat. The phyllo dough on the outside is so nice and tender and flaky. The filling was slightly sweetened, but not so much as to mask the natural apple taste. The filling had a nice integrity to it as you could still get the chunks of apples on the inside. Canned pie filling this was not! With just the right seasoning from cinnamon and sugar, this was a real winner.

The cheese burek was equally as good, although this was savory and not sweet. Feta by itself would've been too overpowering, too salty. The cottage cheese was used both as an extender as well as a way to cut the sharpness of the Feta. Just delicious. I ate both of these at room temperature and they were both absolutely outstanding. Mire indicated that you could gently reheat them if you chose to do so, but it really isn't necessary.

This is exactly the kind of place I love finding. Local ethnic mom and pop shop making wonderfully unique and delicious food that truly everyone can enjoy. I encourage you to stop in at Kiflis to meet Mire and his wife and try some of their truly tantalizing treats.

Similar food is available in Cleveland. Bourekas can be found at Issi's and Jerusalem Grill. I think. I haven't been to either in a long time. Your post reminded me of Abba's. I don't remember whether they had bourekas but they made their own shkug - a hot sauce commonly used as a condiment. That was good hot sauce. I've only had bourekas a couple times and never really got it, but I think eating it as Wikipedia suggested with shkug and hard boiled egg sounds pretty good.

Thanks for the additional suggestions, Stuart, on places in Cleveland to try out. If you're ever down this way (meaning Akron), and have a chance to try out Kiflis, I'd be curious to see how their pastries rate with their Cleveland brethren.

Next time I'm in Cleveland, I'll have to look up Issi's and Jerusalem Grill.

Great review! I'm glad you enjoyed it as much as we did :)

I think that Barakas and borek might be similar but I don'rt think that you would want to tell any one that makes it. As you mentioned there is something similar in cleveland in south euclid but that is also a kosher restaurant and borek is 99% in this case from Bosnians via the ottomans. People tend to have a sense of pride in their food and you can see this very simply in greek and turkish coffee or bosnian for that matter. I would say its 99% the same but its the people that make it that make it different.

My sister recommended this blog and she was totally right keep up the fantastic work!
Bakery Equipment

I just ate some Burek my grandmother bought from Kiflis this evening! I was googling the Slovak name for apple burek but found this site when I was finding a photo for it. Wonderful review!

As for the strudel, it's usually that dry, as my grandmother makes them as well.