A Return To Hudson's Restaurant ... Sort Of

The last time I ran into Chef Kevin Altomare was at the Hudson's Farmers Market back in late September. I was giving a demonstration on how to make panzanella salad and he happened to be sitting near the demonstration tent and we struck up a conversation. I didn't know at the beginning of the conversation that he was co-chef and co-owner of Hudson's Restaurant on the Green in Hudson, but after I identified who I was, I offered that I had reviewed his restaurant a number of months earlier. Unable to get a wi-fi signal on his computer, he was unable to check my review in real time, but remembering the patty melt and homemade potato chips that I had eaten, I assured him that our lunch had been not only tasty, but also a great value, too.

Towards the end of my stint as demonstration chef for the day, Kevin told me that he and his business partners were looking to open up another Hudson's location at some point in the near future, this time in the Montrose/Fairlawn area. Plans were still being worked out at the time and so I opted not to say anything publicly here on the blog in case those plans changed. As it turned out, everything came together nicely and Chef Kevin manned the helm of the second location starting around the beginning of November. While the concept of the second location was more or less a carbon copy of the first, I decided to give the restaurant a few weeks to settle in before doing a serious review.

The newest location of Hudson's was located at 3900 Medina Road, Akron, OH 44333 and can be reached at 330-666-7777. The website has remained the same and information on both the original and the new locations can be found there. Parking for the restaurant was located in the shared lot with the other business in the strip mall. For those familiar with the Montrose area, the restaurant was located in the same space as the old Brown Derby Roadhouse restaurant, which has now moved to a new location on "Restaurant Hill" overlooking Rts. 21 & 77.

After finding a suitably close parking space, I managed to snap a photograph of the exterior of the new restaurant: 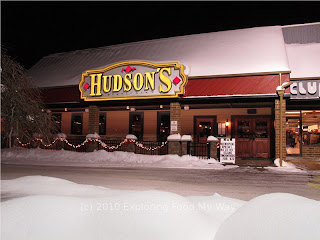 Once inside, I noticed a relatively empty bar area to my right and the dining room directly in front of me. I decided to sit at one of the high top tables in the bar area so that I would be unobtrusive. I was surprised that the bar area was so empty on a Wednesday night at 6:00 PM. However, by the time I had left an hour later, it was filled with hungry diners.

While I had presented you with the lunch menu in my earlier review from the other location, I decided to include Hudson's dinner menu during this write-up: 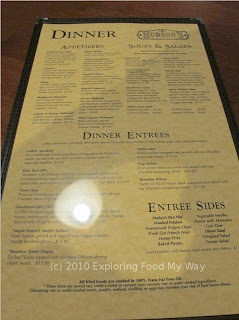 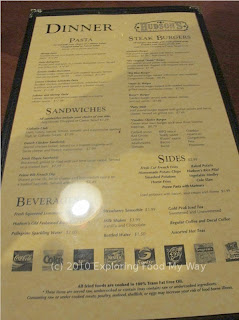 It was clear from studying the dinner menu that the lunch menu was simply a subset of items available during dinner service. I was in the mood for a nice multi-course meal and seeing as many of the entrees came with a side salad included in the price, my only decisions tonight were to choose which appetizer and which entree I wanted for dinner. When my bartender/server finally came over to take my order, I asked her for the daily specials.

She easily rattled off the list and upon hearing that one of the soup options tonight was a Wisconsin Cheddar Cheese Soup, I decided that a cup of that would make an excellent way to start my meal on such a cold day. Here was a shot of the soup: 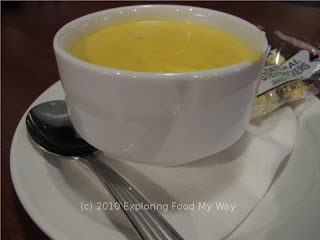 After placing my order, my soup arrived fairly quickly and was accompanied by a small package of Westminster all-natural soup crackers ... a nice touch! I have had these crackers before at upscale eateries and I really thought they added a delicious flavor and contrasting crunch to the otherwise velvety soup. The cheese flavor of the soup was present, but not overpowering and I discovered as I dug my spoon into the depths of the cup that bacon had been added as well. This lent the soup a subtle smoky flavor that complimented the main cheese flavor quite well.

For my salad tonight, I decided on the basic "house" salad and when I heard that a Brandy Balsamic Vinaigrette was available, I asked for it to be placed on the side: 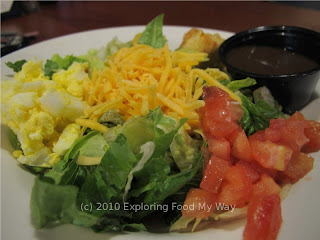 The house salad was your standard mix of greens and reds, but I was happy to see the addition of a bit of chopped egg. As expected, the salad came out unseasoned and after application of the tangy dressing and a bit of freshly ground black pepper, the flavors popped in my mouth. This was a decent enough salad and the only real complaint I had was the croutons did not feel homemade and had an oddly-garlic metallic taste to them. The vinaigrette was quite light on the palate, but I had a hard time discerning the brandy flavor. Then again, I'm not a huge brandy drinker to begin with, so it wouldn't surprise me not to be able to discern the flavor.

For my entree, even though I considered the entire menu, I seemed to gravitate toward the pastas tonight. When I saw that Pasta Bolognese was being offered, I knew that was what I would be having: 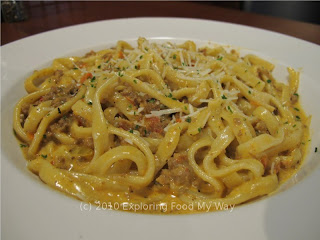 This generous bowl of fettuccine had been cooked to a perfect al dente and dressed (but not overdressed) in a creamy, tomato-less, pork and beef-based sauce. Adorned with a simple grating of Parmesan cheese and chopped parsley, this was a satisfying and filling dish. While the seasoning was spot on, I felt that the flavor was just a tad flat and two dimensional. Like most long-cooking stews and sauces, often times the bright, acidic notes tend to dissipate when given a long cooking process. Perhaps I was missing the acidity that the tomatoes normally add to the classic Italian-American meat sauce. Don't get me wrong, this was still a good dish, but it just needed one extra component to really elevate it. All that said, the portion I didn't finish at the restaurant definitely made it home with me for consumption later in the evening.

The best part of the meal tonight was getting the check ... just barely under $20 including tax. As with my meal at the original location in Hudson, for the quality of food being served, Hudson's offers a very good value to the customer. With dinner items ranging from only a couple of dollars up to twenty dollars for the petite filet mignon, you will definitely find something for everyone's taste and budget. If there were service issues tonight, I didn't spot any and the food coming out of the kitchen was hot, fresh (except for the croutons), and overall, very tasty. With two locations open to serve the greater Akron area, I recommend that you give Hudson's a try if you haven't already done so.
Posted by Tino at 6:00 AM

Meeting friends there tonight... looking forward to it!